My most prestigious award, ever

I've won a few awards during my academic career, including an NSF CAREER award, a Sloan Fellowship, and the highest undergraduate teaching awards available from both the college of engineering and the campus. But the award that I'm by far the most proud of, and still the most humbled by, is a T-shirt.

Every year, the Computer Science Graduate Student Organization at UIUC has a new T-shirt. Designs are submitted by graduate students and judged by a vote among the CSGSO officers. The winning T-shirt design in 2002 was submitted by Howard Sun. I first heard about the design after it won. The first time I saw it was on the actual T-shirt, being worn by an actual graduate student. 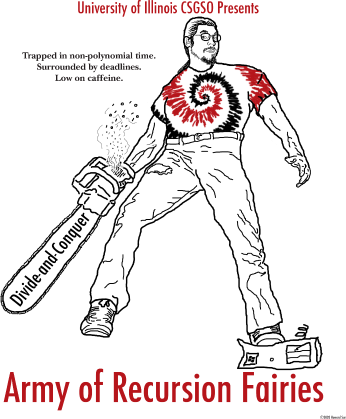 Coincidentally, I am not the Jeff Erickson from Illinois that Bruce Campbell played on TV.