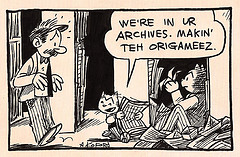 Each title below is a link to the abstract, publication history, copyright information, and electronic copies of that paper. The square icons are direct links to the most recent electronic versions. A more detailed reverse-chronological list of my papers is also available. Many papers appear in more than one category!

Over the years I have developed the habit of reading (or at least trying to read) the original works describing classical geometric, topological, and algorithmic results. This is a practice I strongly recommend. Most of these old papers are surprisingly readable, if you can overcome the language barrier. (To quote Doctor Strange: I'm fluent in Google Translate. Sadly, Google Translate is not fluent in 18th century academic Latin.) These old works also offer surprising insights into the mathematical and personal character of their authors. The following papers grew directly out of this historical pursuit; each paper directly builds on, extends, or improves a result that was at least 75 years old at the time the paper was written.

Computational topology is a rapidly maturing research area at the intersection of mathematics and computer science, focused on the development of efficient algorithms for topological problems arising either directly from topology, from theoretical computer science, or from other areas of computing. Algorithmic techniques have been ubiquitous in topology since its inception more than a century ago, but the efficiency of topological algorithms and their applicability to other computing domains are relatively recent areas of study. Results in this area combine classical mathematical techniques from combinatorial, geometric, and algebraic topology with more recent algorithmic tools from optimization and computational geometry. Plus, you get to draw lots of donuts! And squiggles!

Most of my work in this area involves one-dimensional objects—curves and graphs—embedded in the plane or on some other surface. I've arbitrarily subdivided these papers into three sub-categories, depending on whether the primary object of study is a curve on some surface (possibly represented by a closed walk in some embedded graph), a graph embedded on some surface (in which one wants to compute graphy things like shortest paths and maximum flows), or a surface represented by a graph embedding. Admittedly, this subdivision is deeply spongy; several papers fall under multiple sub-categories.

Voronoi diagrams are everywhere, from turtle shells to giraffe skins to foam in the kitchen sink. Along with their combinatorial duals, Delaunay triangulations, they have been an object of formal scientific study for well over a hundred years. In computer science, they have applications ranging from nearest neighbor searching, to color quantization, to reconstruction of surfaces from digital images. Despite all this attention, there are still questions left to answer!

A polygonal chain is a sequence of line segments joined end-to-end. These papers study the configuration spaces of polygonal chains under simple classes of pivot operations, such as rotating a subchain around an edge, cutting out a subchain and regluing it backwards, or flexing a constant number of angles. Problems in this area have applications in robot motion planning and molecular modeling. Almost all of the work in this category was done at annual workshops run by Godfried Toussaint at McGill University's Bellairs Research Institute in Barbados.

A typical geometric range searching problem has the following form. Given a set of points in some low-dimensional space, build a data structure that allows us to quickly count or retrieve the points in an arbitrary query region. Typical query regions include boxes, simplices, spheres, and halfspaces. Range searching is an extremely common problem in databases, but it also has applications in computer graphics, robotics, and many other areas.

Everything in the real world moves and changes over time. Modeling or interacting with the real world requires understanding that motion and designing algorithms to handle it. For example, any simulation of moving physical objects must detect collisions between objects (and update the motion of the colliding objects). Many of these papers work within the kinetic data structure framework originally developed by Julien Basch, Leo Guibas, and others.

Algorithms are traditionally designed and analyzed for efficiency only in the worst case, but worst-case inputs for many problems are often highly contrived. As a result, many simple geometric algorithms, heuristics, or "hacks" perform often considerably better than the theory predicts. These papers consider geometric algorithms in more realistic input models. The goal here is to identify useful combinatorial and geometric features of real geometric data, and then either analyze existing algorithms in light of those features, or develop new algorithms to exploit them.

Most theoretical computer science research focuses on developing efficient algorithms and data structures, in an attempt to find the fastest possible solution for a given problem. The flip side of this endeavor is proving lower bounds, that is, to quantify the inherent difficulty of solving a problem. In a few rare cases, this difficulty can be quantified precisely, at least in certain models of computation. ("Sorting requires Ω(n log n) comparisons. The Fermat-Weber problem cannot be solved exactly.")

Most theoretical computer science research focuses on developing efficient algorithms and data structures, in an attempt to find the fastest possible solution for a given problem. The flip side of this endeavor is proving lower bounds, that is, to quantify the inherent difficulty of solving a problem. This difficulty is most often formalized by comparison to some other presumably hard problem. ("Graph coloring is NP-hard. Two-dimensional motion planning is 3SUM-hard.")

This is work that doesn't really fit into any of the earlier categories.

Thus, be it understood, to demonstrate a theorem, it is neither necessary nor even advantageous to know what it means.... [A] machine might be imagined where the assumptions were put in at one end, while the theorems came out at the other, like the legendary Chicago machine where the pigs go in alive and come out transformed into hams and sausages. No more than these machines need the mathematician know what he does.

I have come to the conclusion that the making of laws is like the making of sausages—
the less you know about the process the more you respect the result.

People who love sausage and respect the law should never watch either one being made.